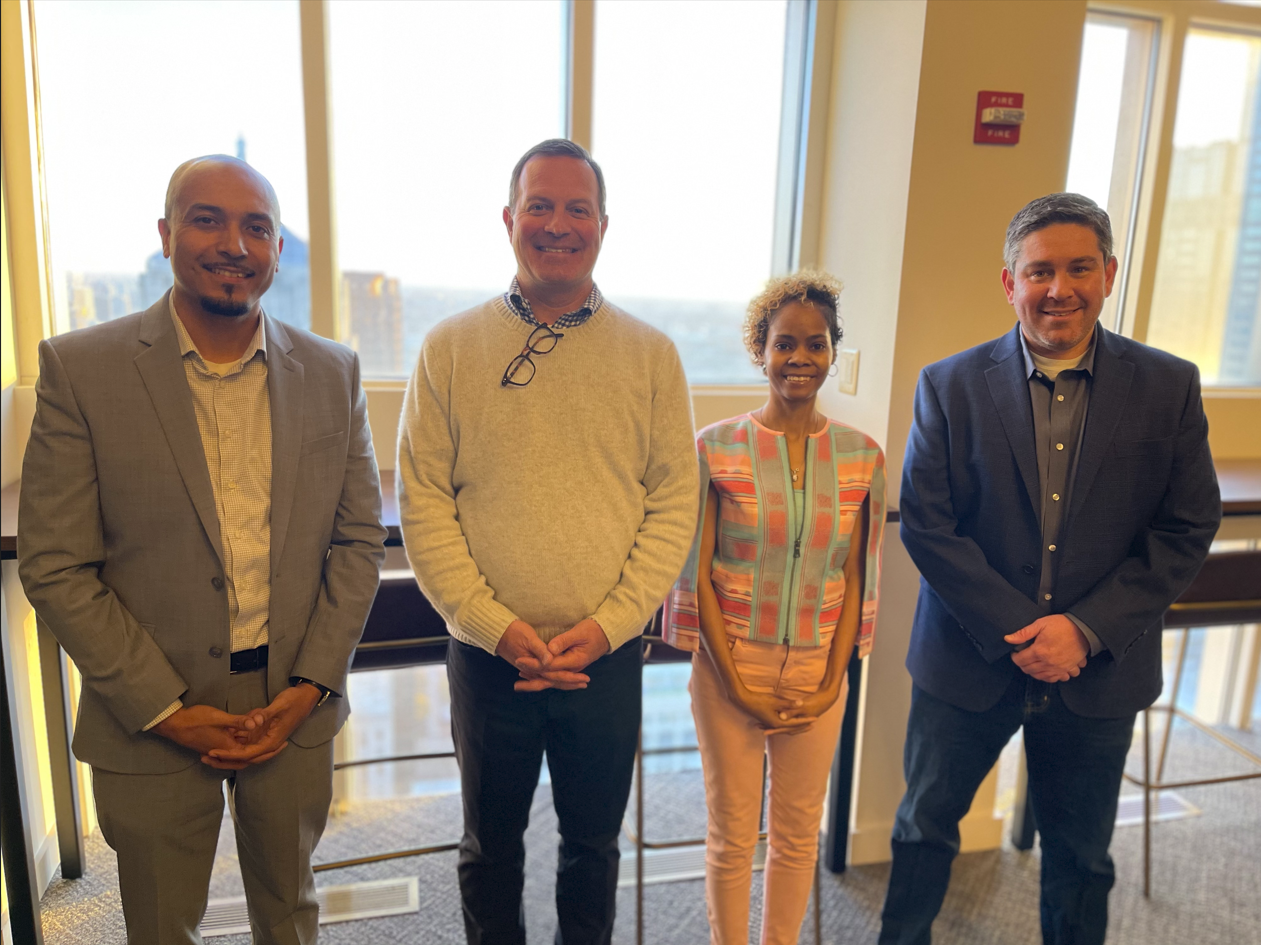 CHICAGO – The Cannabis Business Association of Illinois (CBAI), the state’s leading cannabis trade group, elected a diverse, new line-up of industry executives to serve two-year terms on the board of directors during its recent annual meeting. In addition, the group selected several members to serve in board leadership positions.

“Our board members reflect the diversity of our membership,” said CBAI Executive Director Pam Althoff. “We take seriously the state’s pledge to create an equity focused recreational cannabis program. Our leadership, together with our members, will continue to support policy recommendations to help the state live up to its pledge on equity.”

Board Chair Jeremy Unruh, senior vice president of PharmaCann Inc, said CBAI will advocate for state legislation in 2023 to streamline the confusing multi-agency oversight of the state’s cannabis program and eliminate the use of a federal tax penalty that prohibits cannabis businesses in Illinois from deducting normal business expenses such as rent and payroll.

“The maze of regulatory hurdles at the state level is a significant challenge to success in the Illinois cannabis market,” Unruh said. “For social equity entrepreneurs especially, the additional burden of crippling tax penalties makes it nearly impossible to get their businesses off the ground.”

The CBAI also appointed the following board members to leadership positions for the 2023-2024 term: Portia Mittons to serve as treasurer, Tim O’Hern to serve as vice chair, and Don Williams to serve as second vice chair. Those new officers join Chair Unruh, Secretary Leventis and immediate Past Chair John Sullivan as the organization’s executive committee.

Jeremy Unruh/PharmaCann
Jeremy Unruh is the Chair of CBAI’s Board and senior vice president of regulatory and external affairs for PharmaCann Inc., which operates more than sixty licensed cannabis facilities, including dispensaries and cultivation centers. He is responsible for the company’s external matters, including legislative policy and public affairs; media relationships; organized labor, and coordination with state and local regulators. Jeremy also oversees the development of the PharmaCann social equity and corporate responsibility program. A former prosecutor, Jeremy also went into private practice focusing on commercial litigation, internal compliance investigations and product liability defense.

Ted Brunsvold/Nature’s Treatment
Ted Brunsvold is founder and owner of Nature’s Treatment of Illinois, with locations in Milan and Galesburg. Ted is also the President/founder of Illinois Governmental Consulting Group, LLC, a consulting and lobbying firm that works with the Illinois General Assembly, City of Chicago, Cook County and U.S. Congress. He has been a member of CBAI since its inception in 2019 as well as CBAI’s precursor Medical Cannabis Alliance of Illinois.

Ambrose Jackson/1937 Group
Ambrose Jackson is the Chairman and CEO of the 1937 Group, a parent company of several businesses in the cannabis industry, including cultivation, processing, infusion, transportation and retail. He has 12 years of experience in healthcare business management, leading departments responsible for regulatory compliance, patient safety and quality improvement. He has also worked at recognized organizations like Cleveland Clinic and Advocate Aurora Health and has served on the Board of Directors for the America College of Healthcare Executives and Big Brothers Big Sisters of Northeast Ohio.

Laura Jaramillo Bernal/NuEra Cannabis
Laura Jaramillo Bernal is the Director of Special Projects for NuEra Cannabis, where she has navigated the Illinois and Michigan cannabis industries, working on everything from securing zoning approvals to supervising buildout projects. Before joining the cannabis industry, Laura served as COO of NAIM Media Group, a DC-based media company that develops, produces and distributes content. She also served as Executive Producer of Efecto Naim, an Emmy-winning weekly international affairs show broadcast throughout the Americas. She has been selected as a World Economic Forum Global Shaper, as one of Huffington Post’s 40 under 40 Latinos in Foreign Policy and as a Michael Rockefeller Memorial Fellow.

Gabriel Mendoza/4Front Ventures
Gabriel Mendoza is Executive Vice President of Retail Operations at 4Front Ventures, where he shepherds retail projects into and through every stage of the business life cycle. He is also the cofounder of Chicago NORML, a non-profit that worked to help shape the equity provisions of Illinois’ cannabis legislation. A lifelong Chicagoan, Gabriel got his start in the Illinois cannabis industry in 2014 when he applied for and won one of the medical cannabis cultivation licenses and one of the sixty medical cannabis dispensary licenses.

Portia Mittons/Bridge City Collective
Portia Mittons is the cofounder and Retail Vice President of Bridge City Collective, a multi-state cannabis business with a focus on education and wellness. She is also co-chair of CBAI’s Minority Access Committee, where she works to help social equity applicants thrive in the cannabis industry. Portia co-owns the cannabis dispensary Coughie Pot in Sumpter, Oregon and is actively engaged in numerous cannabis symposiums and conferences focusing on social equity issues, careers in cannabis and CBD guidance.

Terry Peterson/Progressive Treatment Solutions
Terry Peterson is the CEO of Progressive Treatment Solutions, a licensed medical cannabis cultivation and manufacturing facility. He previously served as Vice President for Corporate and External Affairs at Rush University Medical Center, Chairman of the Board for the Chicago Transit Authority and CEO of the Chicago Housing Authority. Terry has also spent time in public service, serving as Alderman of Chicago’s 17th Ward and Executive Assistant to Mayor Richard Daley.

Scott Golden/Cresco Labs
Scott Golden is the Vice President of Public Affairs at Cresco Labs, one of the first medical cannabis license holders and an original CBAI member. He supports Cresco’s government affairs, social equity and community integration teams, as well as Cresco’s legislative and regulatory priorities. Scott has assisted CBAI in crafting draft legislation, including HB1443 and the federal Cannabis Administration and Opportunity Act. Prior to joining Cresco, Scott worked as a litigator in private practice and as a government attorney.

James Leventis/Verano
James Leventis is Vice President of Legal, Head of Regulatory, Compliance and Government Affairs at Verano Holdings. Since its formation, James has helped the company grow from a single-state operator to a publicly traded corporation with vertically integrated operations across twelve states. Prior to joining Verano, James developed an extensive background in the cannabis industry during his time in private practice, where he was an integral part of helping several applicants develop and operate medical licenses in Illinois.

Frank Perullo/Ascend Wellness Holdings
Frank Perullo is the cofounder and Chief Strategy Officer of Ascend Wellness Holdings, which owns and operates state-of-the-art cultivation facilities. He is also the founder of Novus Group and Sage Systems, one of the leading providers of web-based campaign management software. Sage’s ListManager tool empowered thousands of campaigns across the country to make data driven micro-targeted decisions. Frank has served as the general consultant and pollster on hundreds of successful campaigns and has been named by Campaigns and Elections as one of the nation’s most powerful political influencers.

Don Williams/Curaleaf
Don Williams is Vice President of Government Relations for Curaleaf, a medical and recreational marijuana dispensary that operates in more than 20 states. He joined Curaleaf in 2019 and covers the company’s Central and West Regions of the United States. Don previously worked in the private and public sector for over 30 years. He started his corporate career at McDonald’s Corporation in training, operations and government relations.